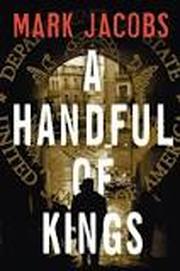 “If John le Carré were an American, his name would be Mark Jacobs.”  - Kinky Friedman

“No writer is as brilliant as Mark Jacobs at exploring the rich fictional realm of the American abroad. He blends the literary traditions of Henry James and Graham Greene in work that is truly his own and truly wonderful. A Handful of Kings is his best book yet.  – Robert Olen Butler, Pulitzer Prize winner in fiction

"Mark Jacobs's A Handful of Kings was published by Simon and Schuster in 2004. It is a novel of terrorism and diplomacy, and peopled by an impressively multifarious cast. Jacobs's prose can stun, and his characters' meditations on how best they might serve their cause or country are filled with insight of vital newness and urgency. It is certainly a novel of Now, but it has a psychological acuity and ceaseless insistence upon dowsing the complications of character and motive. This helps propel it to atmospheres of sophistication miles above that of typical thrillers... With this novel, Mark Jacobs has written neither Greene-like prophecy nor submitted one of le Carré's artful diagnostic analyses of the psychic health of espionage's hidden realms. He has written a novel rich with feeling for the mysterious world his characters inhabit, and he has put them, and us, through hell in a very small space. The novel is thrilling not for its action or some vestigial obedience to its supposed genre, but for its moments of human recognition and harrowing yet still human surprise."  -- Tom Bissell in     The Believer
Powered by